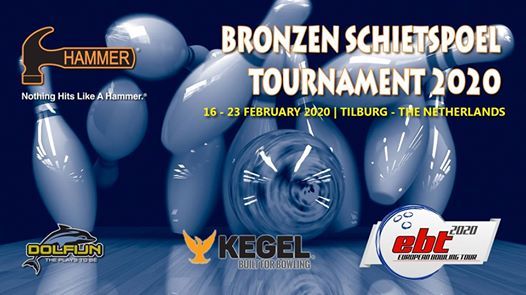 Event:
Singles mixed, ladies receive 8 pins handicap per game. As a consequense of this handicap the maximum scratch game for women is 292. The tournament is open to all athletes owning a current international licence issued by their respective national federation (WTBA).

Venue:
Dolfijn | the plays to be, Ringbaan Oost 2a, Tilburg, The Netherlands

Qualification Round:
6 games American Style, changing lanes after each game. There will be a maximum of two athletes per lane.

Re-entry:
Re-entry is allowed. In case of a re-entry the highest qualification counts, the other scores will not count for the main qualification standing. Maximum one entry and maximum two re-entries can be pre-ordered.

36 athletes will qualify for the final step 1, which is:

Final step 1
36 athletes will play 6 games starting from scratch
Top 12 will qualify for the final step 2, seeded 5-16
Athletes not continuing will be ranked 17-40 according to their final positions in step 1

Seeding for the final steps 2-3
In step 2, the athletes are seeded as presented above
In step 3, the athletes will be seeded according to a standing produced by the 8 two games totals for athletes qualified from step 2

Matching in the final step 2-4
In each of the steps 2-4, there will be 4 athletes in each pool.

In step 4 the one pool (7) will be composed by the 4 athletes qualified to the step.

Each pool will be assigned to a pair of lanes
Two games will be played in each step starting from scratch, total pin fall to count

Desperado
A tie influencing who will qualify for the first final step will be broken by playing a 9th and 10th frame roll off, repeated until the tie is broken.

Final Step 1
Ties influencing who will qualify for the final step 2 will be broken by playing a 9th and 10th frame roll off, repeated until the tie is broken. In all other tie situations in step 1, a procedure similar to the procedure for the qualification will be followed.

Final Step 2-3
Ties influencing who will qualify for the next final step will be broken by playing a 9th and 10th frame roll off, repeated until the tie is broken. For all other ties in the final step 2-3, the seeding number for the step will decide the order.

Final Step 4
Any tie will be broken by playing a 9th and 10th frame roll off, repeated until the tie is broken.

Ranking Points EBT 2020:
In this tournament the top 50 men and top 50 women will be awarded triple ranking points for the European Bowling Tour 2020. Ranking will be determined as followed:
1. Position in the tournament.
2. When bowlers are eliminated in the same round; ranking in that round.
Top 8 men and top 8 women of the European Bowling Tour 2020 will qualify for the EBT Masters 2021.

Disputes:
The tournament directors decision will be final in all cases not covered by the present rules.

Schedule for the final steps

➡️ The many styles at the PBA Indianapolis open | shots from matchplay;
➡️ Kris Prather on the Front Nine at 2020 Roth/Holman Doubles Championship;
➡️ EJ Tackett Tries for 300 at 2020 PBA Roth/Holman Doubles.
https://www.vissparboulingu.lv/video/video-galerija/

Share on FacebookShare on TwitterShare on Linked InShare by Email