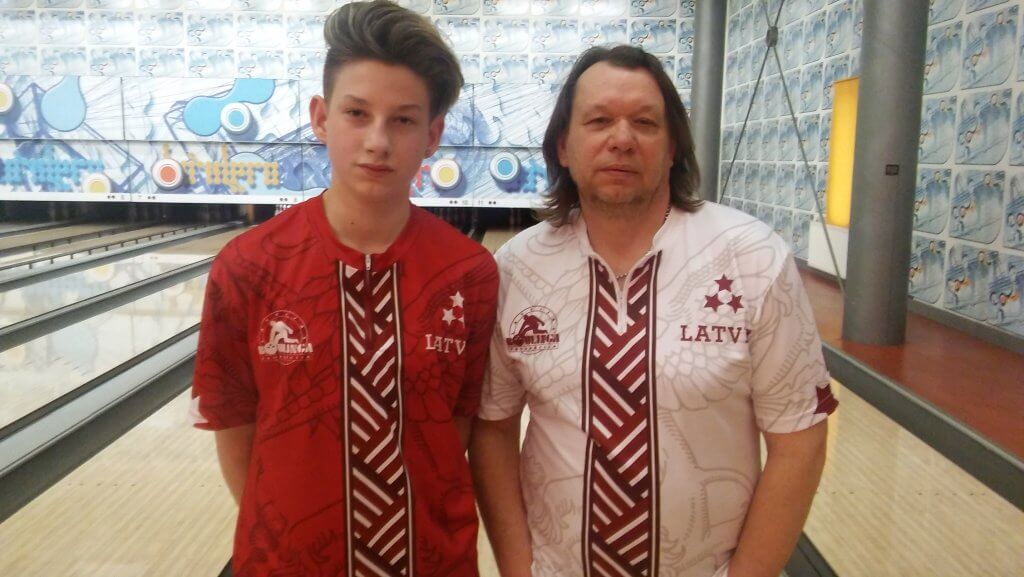 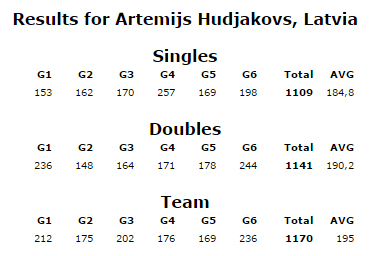 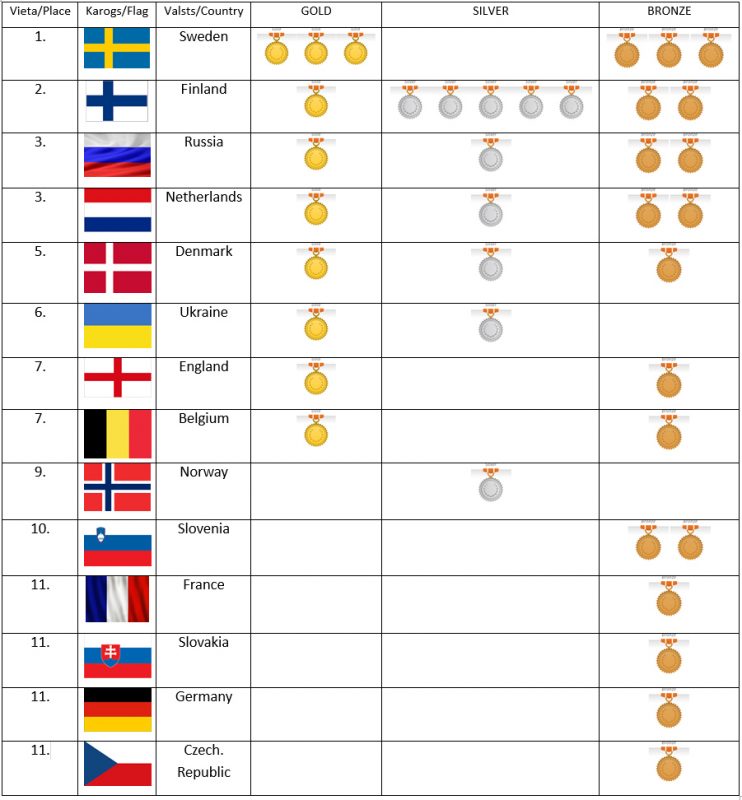 Denise from Netherlands is the Champion. 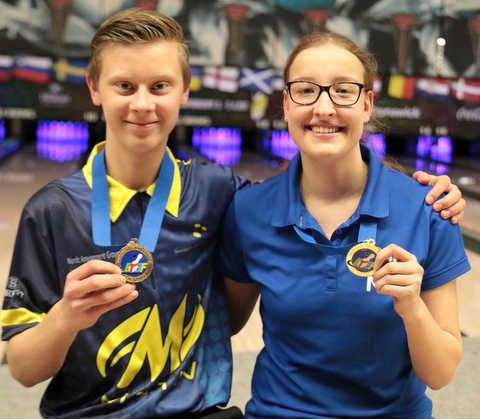 Denise lost also the first game in final against Megan 164-166, but won two next games 246-203 and 214-205 and took the gols medal in masters. “This is my third time in EYC and I have never before won medal, than here in Tali. And now I have three medals in a row. Feels amazing. I am so happy”, Denise said. “This is a wonderful center, big and very open. I like the center very much. Also Helsinki is a nice city, as much as I saw from it”, she said. 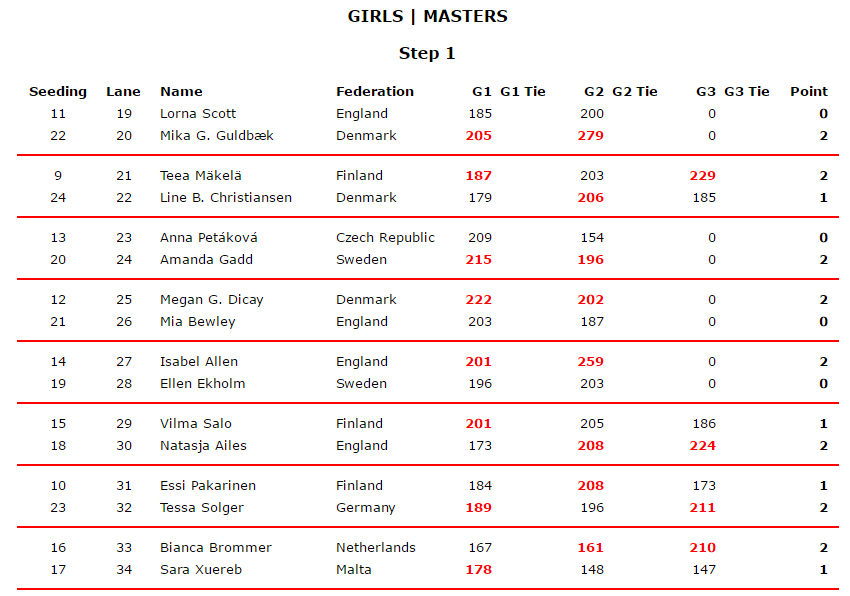 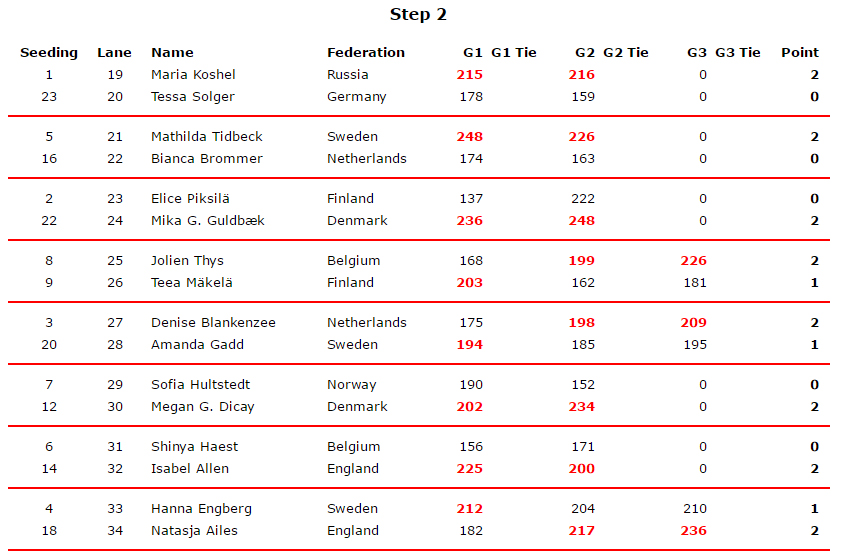 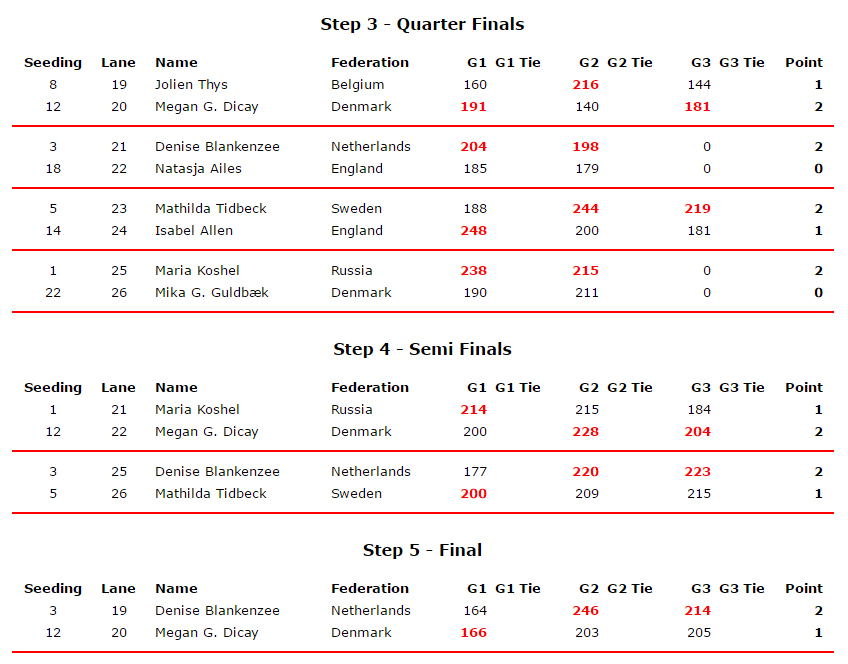 William from Sweden is the Champion.

Both boys semi finals went to tree games. Oleksandr Nechypaiev beat Joppe Belmans with games 237-222, 181-197 and 233-180. William Svensson won Ziga Zalar in the first game 188-185, but lost the second 143-213. Then William came back in business and won the third game 252-189. In the final Oleksander took the first game 222-203, but William the next two 273-189 and 258-193. William is now back to back Champion in EYC masters, since he also won last year in Reykjavik. “Today I just focused on every shot, one by one. I have been a bit sick and struggled whole week, but today I was feeling good and in good shape”, William said. “I still have two more year in the youth, so lets hope that I can win this again. I still can improve my mental game and try to be better in repeating every shot”, he said. 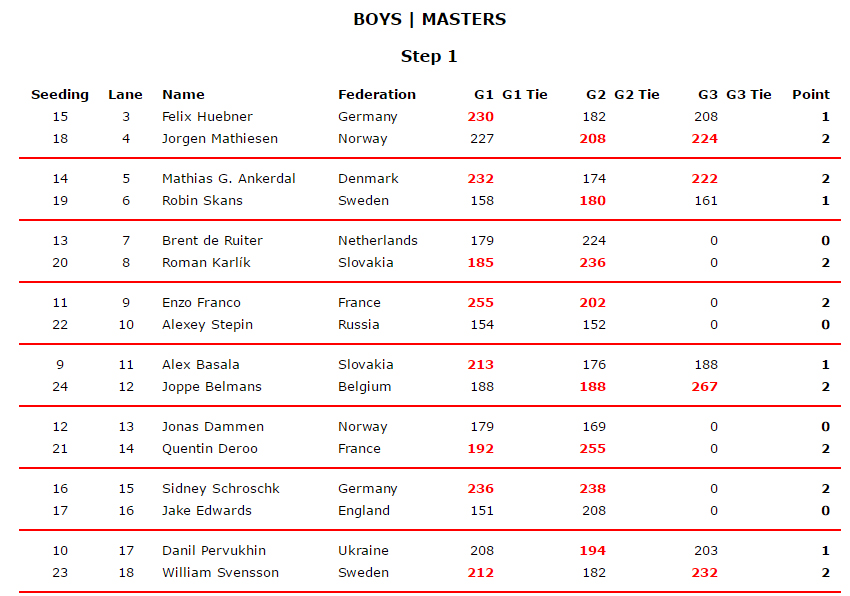 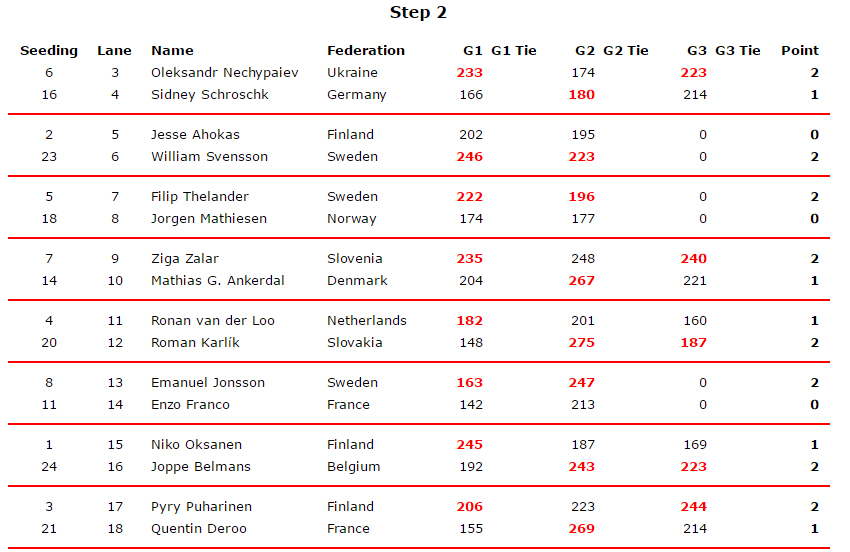 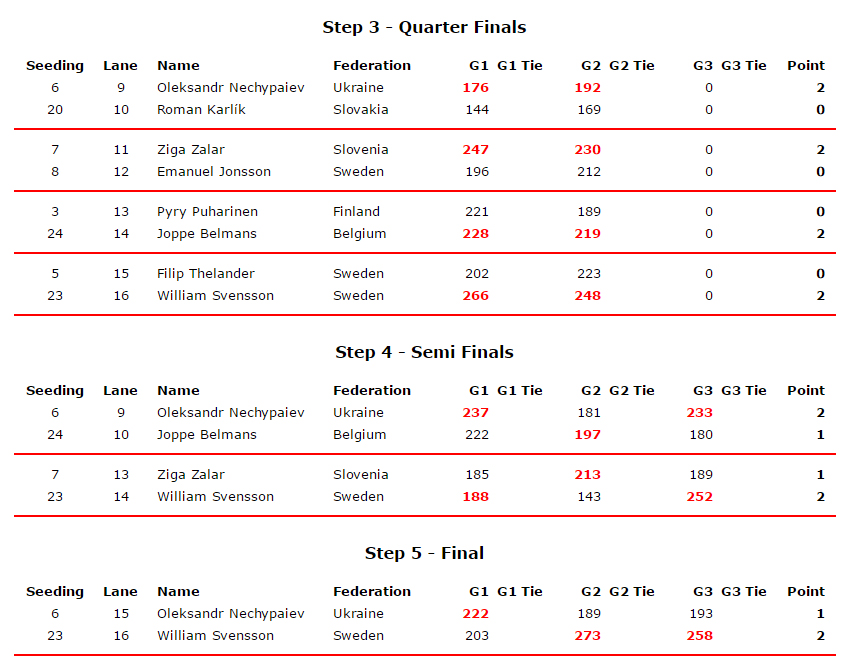 Exciting finish in girls all event. 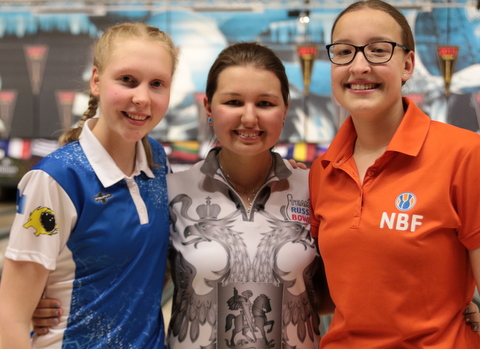 The audience in Tali saw very exciting finish in girls singles qualification and all event. Before the last game it was only sure, that Maria Koshel will be the all event’s champion and in the singles final, all the rest was open. Anna Petakova from Czech Republic shot five strikes in a row from the fifth frame in the last game and took the second place in singles qualification. Megan G. Dicay, who played in the morning squad was number three and Lorna Scott from England fourth. Finland’s Essi Pakarinen was on her way to semi final still in seventh frame, but the she made an open frame and missed pins 2/4 in the last and was left out with 11 pins.

I knew that I can bowl well, but I did not know that I can bowl this well and take the all event gold medal”, Maria Koshel said. “This is the first all event gold to Russia and I can not find words to express, how happy and pround I am. I hope that Russian girls will develop for the next year, so we can do the same as Finland this year. Take all medals in all event”, she smiled.

In all event Maria Koshel played 3788 (210,4) in 18 games and took gold medal. Swedish girls Hanna Engberg and Mathilde Tidbeck hunted silver and bronze until the last game. Hanna finished with 166 and missed the bronze medal with five pins, Mathilde with 173 and missed the medal with 14 pins. So the silver medallist is Elice Piksilä from Finland and bronze medallist Denise Blankenzee from Holland.

Finland took everything in boys all event. 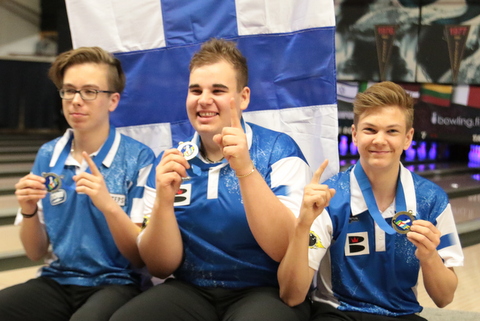 EYC 2017 boys all events finished to Finnish celebration. Niko Oksanen took the gold medal with a new Championships record 4187. Jesse Ahokas is the silver medallist, 213 pins pins behind Niko, so there was no questions in Tali, who is the best boy in the center. In the last single squad there were couple of boys fighting for the bronze.

Emanuel Jonsson from Sweden hunted Finnish Pyry Puharinen, and both of them hunted the result of Ronan van der Loo from the Netherlands. In the last game Emanuel made an open in the second frame and was not able to strike out. He finished with a 210 game, which was not enough for the all event medal, but enough for the single’s semi finals. Pyry made 247 in the fifth game and then 245 in the last and took the bronze medal with 23 pins difference to Ronan. “This is unbelievable, amazing feeling”, 14-years old Pyry said. “Big thanks to my personal coach Sami Heinilä, who quided me to the right line in two last games”, Pyry told. “It is great and more great to get all medals in all event here in Tali, in our home country”, Jesse Ahokas said.

To Niko this is the last event in youth, so he was very pleased for the gold, second one in a row while he won all event also last year in Reykjavik. “This gold was my primary target here in Tali, because it is the most valuable medal”, Niko said. “I have now got medal in each event here and in masters we will go for the gold. We have lost so many stepladders here, I am getting tired to it”, Niko smiled.

In the singles qualification Ziga Zalar, Slovenia, was on top with score 1438. Sidney Schroschk from Germany was best in the second squad and took the second place. Niko Oksanen and Emanuel Jonsson had a tie with score 1384. Emanuel won the roll off 40-25 and will meet Sidney in the semi final. Niko will play against Zalar.

Megan G. Dicay from Denmark have won the gold in singles event. 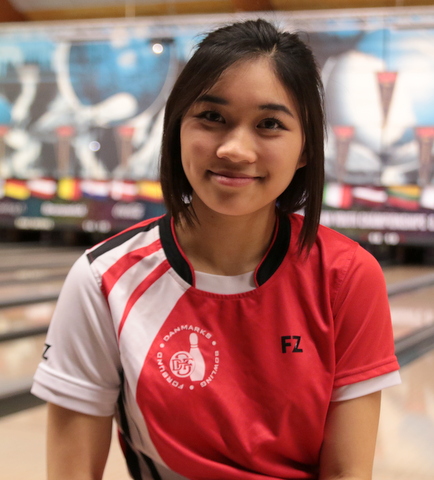 Danish Megan G. Dicay was in good shape in girls first single squad. Before today her best six games result was 1139, now she bowled 1226 and will have an exciting afternoon, while waiting if this is enough for the singles semi final. “This was my best six games here in Helsinki. Now I played more out and hooked more, before I had more tight and straight line”, Megan said. “I hope that this is enough for the medal games. Now I am very nervous and excited”, Megan finished. Shinya Haest from Belgium, 1205, was second in the squad followed by Elice Piksilä Finland, 1199, and Jolien Thys Belgium, 1192.

There will be strong players in the second squad. Elice Piksilä is now leading the All Event, but two best players after 12 games, Maria Koshel, Russia, and Hanna Engberg, Sweden, are coming to play in the last qualification squad in EYC 2017. To beat Elice Maria needs to score 1091 and Hanna 1132. The two more players who can drop Elice out from the medals in All Event, are Mathilda Tidbeck from Sweden and Sofia Hultstedt from Norway. Both of them need to score 1214 for to reach Elice’s total. 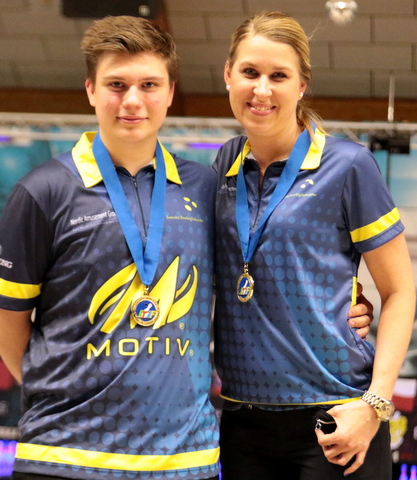 Emanuel Jonsson (in picture with his coach Diana Alfredsson) from Sweden is the European Champion in boys single 2017. He beat in semi final Sidney Schroschk, Germany, easily with scores 232-177. In the other semi final Finland’s Niko Oksanen won Ziga Zalar from Slovenia, 235-164. Emanuel got a good start to the final, while he with a bit luckily got some strikes in between good shots and made four in a row. In sixth frame Emanuel led with 30 pins. The fight finished in the last frame, when Niko made on open frame. Emanuel won 213-180.

“I felt really good, when we started and had two lucky strikes in the beginning of the game. I need to have enough adrenalin and then I bowl well and today I had it”, Emanuel said.

England girls are the team champions. 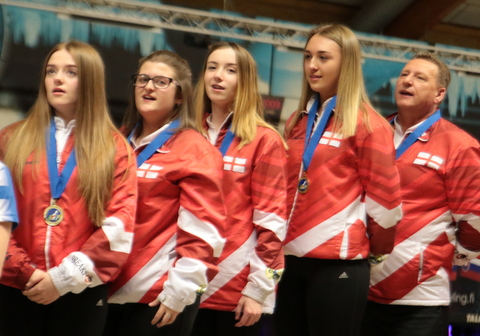 In girls semi final looked like Sweden is beating England easily, but in the last frame they threw it away with some opens. England said thank you and won 755-723. The match between Finland and the Netherlands was also tight. In the last frame Finland was stroger and marched in to the final with scores 756-729.

Girls final was a thriller. England had in half way the lead with 50 pins, but Finland came back to the game in 8-9 frames. England’s last player, Mia Bewley, had the keys in her hands, but she finished with an open frame. Then Teea Mäkelä had a chage to become a hero, but after a spare she took only eight pins and there was a tie 750-750. Breaking the tie all four players made one shot and the total was counted. First round ended in tie 38-38, but England won the second 38-34 and took the gold medals. In the gold medal team were playing Isabelle Allen, Lorna Scott, Mia Bewley and Natasja Ailes.

Tomorrow in Tali we will have boys single, and on Saturday girls single. 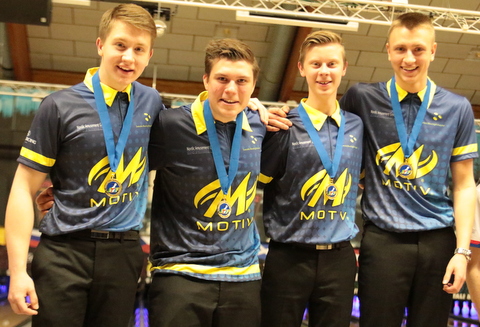 In semi finals the full house Tali got what wanted, three matches were really exciting. Sweden’s boys team had no problems in their game against Slovakia and won by high score 948-817. Denmark managed to fight against Finland until eighth frame. Then started the blue-white colours the march to victory and Finland earned the place to the final with scores 889-832.

Boys final was a celebration of Sweden. Robin Skans, Emanuel Jonsson, William Svensson and Filip Thelander started the strike show from the first frames and Finland could not answer. Sweden won the titel match 937-814.

Belgium is the girls gold medallist in doubles. 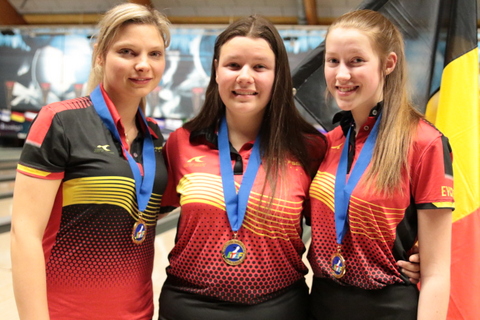 Belgian girls Jolien Thys and Shinya Haest beat Sweden in the semi final 388-349 and Norway in the final 404-345. The semi final was tight until the tenth frame, but the result of the final was more or less ready in eighth frame. In their own semi-final Norway won the qualification winner Russia with one pin, 389-388.

17-years old Jolien and 16-years old Shinya did not believe that they won, eventhough there were big smiles on their faces. “I feel, I am still dreaming”, Shinya said. “I had hard time in the official practise and did not feel comfortable at all. Today I was pretty calm and also my spares were good”. Shinya is looking very calm when she plays and she confirms that herself. “I’m normally never nervous, I get stressed only when I really feel like I am in a small corner”, she said.

In the picture left the coach Melissa Vallons, Jolien Thys and Shinya Haest. 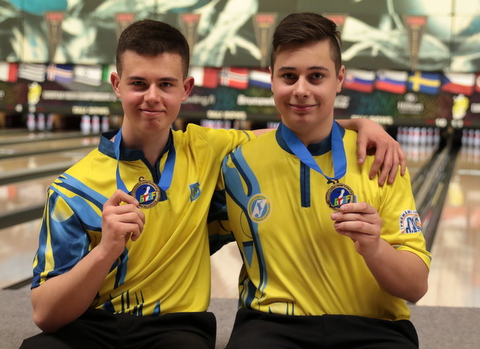 European Youth Championships first medal matches were really exciting and tight. Ukraine beat Finland in the semifinal 412-402. The anchorman Mykola Sielin hit the last strikes in the 10th frame, when the opponent gave the chance. In the other semifinal the Netherlands won France quite clearly 436-399.

The victory of the final was already almost in the Netherlands pocket, while they were 26 pins ahead in the 7th frame. In the last frame the second boy from the Netherlands, Ronan van der Loo could have closed the door with a strike or a spare. But he missed the seven pin and gave the keys to Mykola. He said thanks, and hit two strikes and Ukraine won 410-406. The other gold medallist is Oleksandr Nechypaiev.

“It was really exciting, the whole day”, Ukraine boys said. “I just tried to clean my head and concentrate to each shot. It was more difficult before, than in the last frames”, Mykola said about crucial moment”.
“Feels good. All the work, that we have done at home, got now the payment”, Mykola smiled.

The Schedule is preliminary until the Team Managers Meeting. The Schedule below is very final but minor changes are possible.

In Boys and Girls Masters step 2, winners from step 1 move two lane pairs to the right (inside the ring)